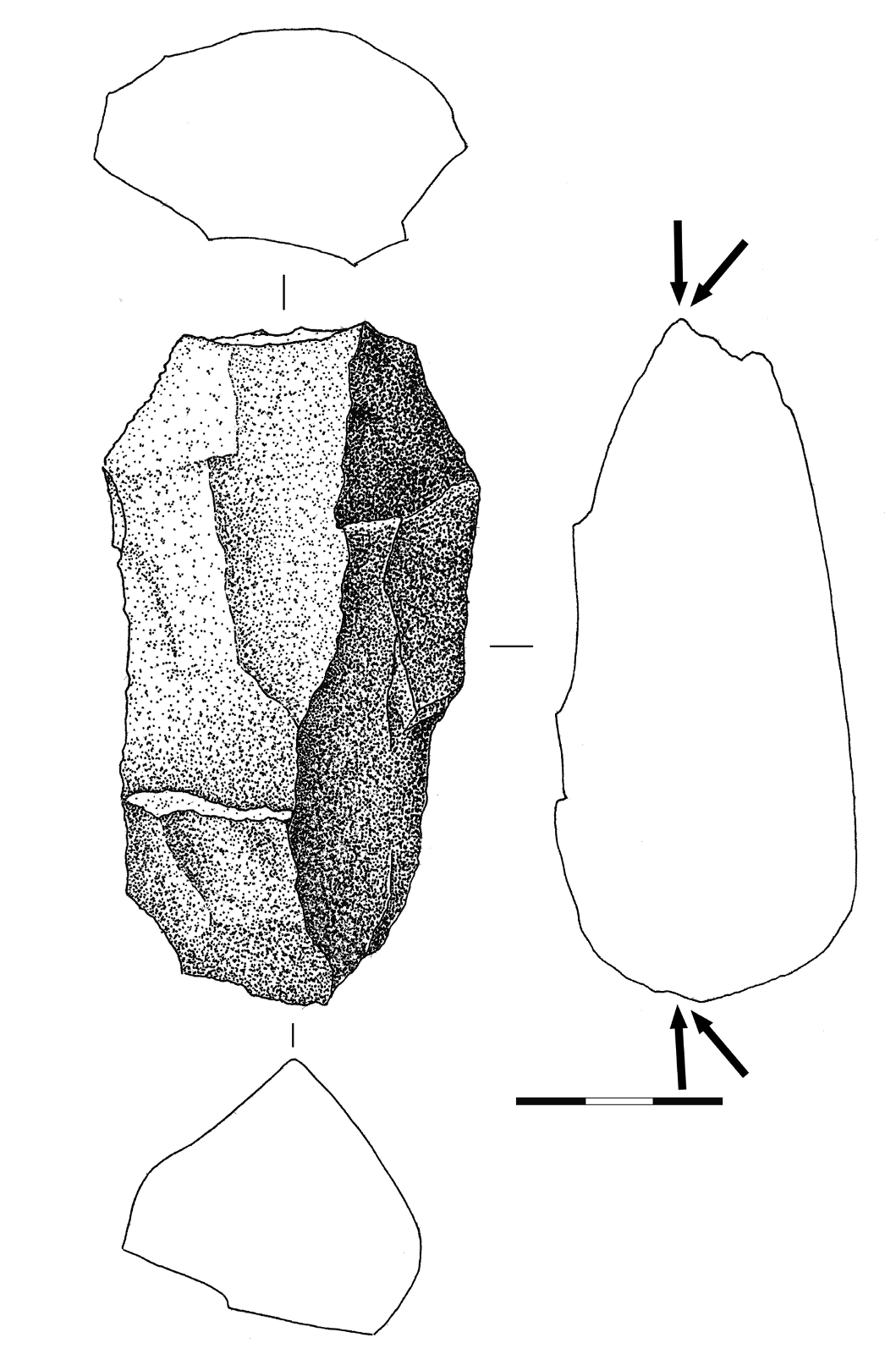 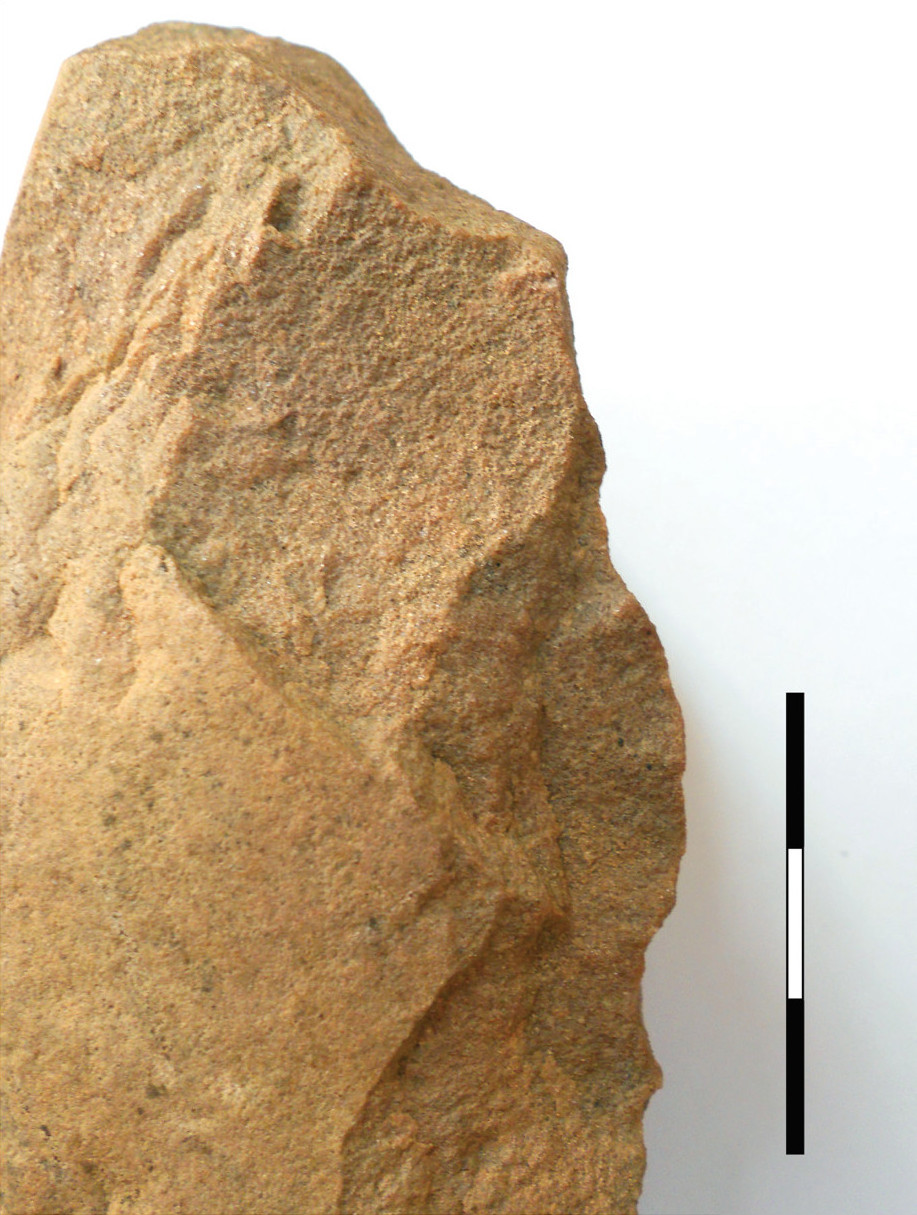 Summary: The investigation of non-flint raw material artifacts of Final Palaeolithic–Mesolithic period was a topic that Lithuanian archaeologists did not pay a lot of attention to. For many years this group of finds was ignored or hardly recognized during the excavations. The lack of information published and an obscure number of raw material artifacts in the museum collections of Lithuania has led to collect all the probable raw material artifacts altogether and to obtain as much information as these finds could actually provide. All types of artifacts were analyzed, meaning raw material knapping assemblage and the definite implements.

After a careful research of the collections of finds in the museums and newest data of recent excavations, more than 1,500 artifacts were chosen up, added to the database, and were examined on different aspects. The types of raw material used were determined with a help of geologists from Vilnius University. Each artifact was described according to its general size measurements and a possible shaping work done on it. Artifact examination results were defined by making statistic diagrams and resumptive interpretations. This has lead to the following conclusions: At least 15 types of different non-flint raw material were undoubtedly known during the Final Palaeolithic and Mesolithic period in the area. The most commonly used were sandstone, quartzite and basalt-diabase materials. These kinds of pebbles are usually found all over the area and were probably not to be searched on purpose.

On the whole, 19 archaeological sites with some raw material find collections were detected in Lithuania. The non-flint artifact assemblage found in Pasieniai 1, Sudota 2, Sudota 4 sites was essential for making the reconstruction of raw material knapping and shaping techniques and for distinguishing all sorts of possible implements. Few sites in the region of Žeimena riverbank have yielded a specific pyroclastic rock finds. Numerous flakes have shown that pieces of this type of rock were probably brought by icesheet from Scandinavia. Prehistoric people recognized it as useful and tried to knap it in at least five different sites. This could be an indicator of a simultaneous dating of some settlements.

Some sort of rough knapping technique and different ways of polishing were used for non-flint tool manufacturing during the pre-Neolithic period in Lithuania. This resulted different types of finds identified in sites: some cores and chipped pebbles, lots of short and wide flakes, few blades, some sandstone and granite percussion tools. The bigger part of implements was used for polishing: polishing slates (also fragments) and polishers made of sandstone mainly. Some of the tool types could not be manufactured out of flint or organic material, so some of raw materials (e.g. sandstone) are considered to have been irreplaceable. The basalt axe found at Sudota 2 was defined as belonging to the earlier period than Neolithic. The possible outcome of this dating could be a reinterpretation of polished axes chronology. All similar axes, especially accidentally found, were dated to Neolithic or even later periods so far. This interpretation could be reconcidered according to the recent data.

One possibly new tool type was determined. Some quartzite flakes with denticulate sides could probably be interpreted as some sort of scraping implements, probably used for fish scale scraping off or some similar activity. However, these finds should be examined more closely and a different appliance can be determined. Flaking of non-flint rocks was not as progressive as flintknapping, although some chaîne opératoire can be seen on cores undoubtedly. There are almost no implements with secondary micro-retouch discovered in Palaeolithic-Mesolithic sites in Lithuania. Therefore, there is only a possibility of finding some utilized flakes after the micro-scanning analysis.

Non-flint raw material was treated in specific ways in different periods of Stone Age. This would suggest discerning some chronological stages. In Final Palaeolithic and during the first part of Mesolithic tentatively raw material was worked up only by flaking. In the Late Mesolithic people could have started to polish non-flint material, and knapping was still practiced. Probably flaking technology came to an end on the same time as flintknapping tradition. This could be seen in the decreasing number of raw material debitage in later periods. The evidence of a new group of non-flint raw material artifacts should trigger an appropriate attention of Stone Age archaeologists in the future. Tool manufacture technologies need a further examination by experimental archaeology, some microanalysis of use-wear of implements and flakes have to be done, meanwhile this paper is just a basic start of awaiting investigations.