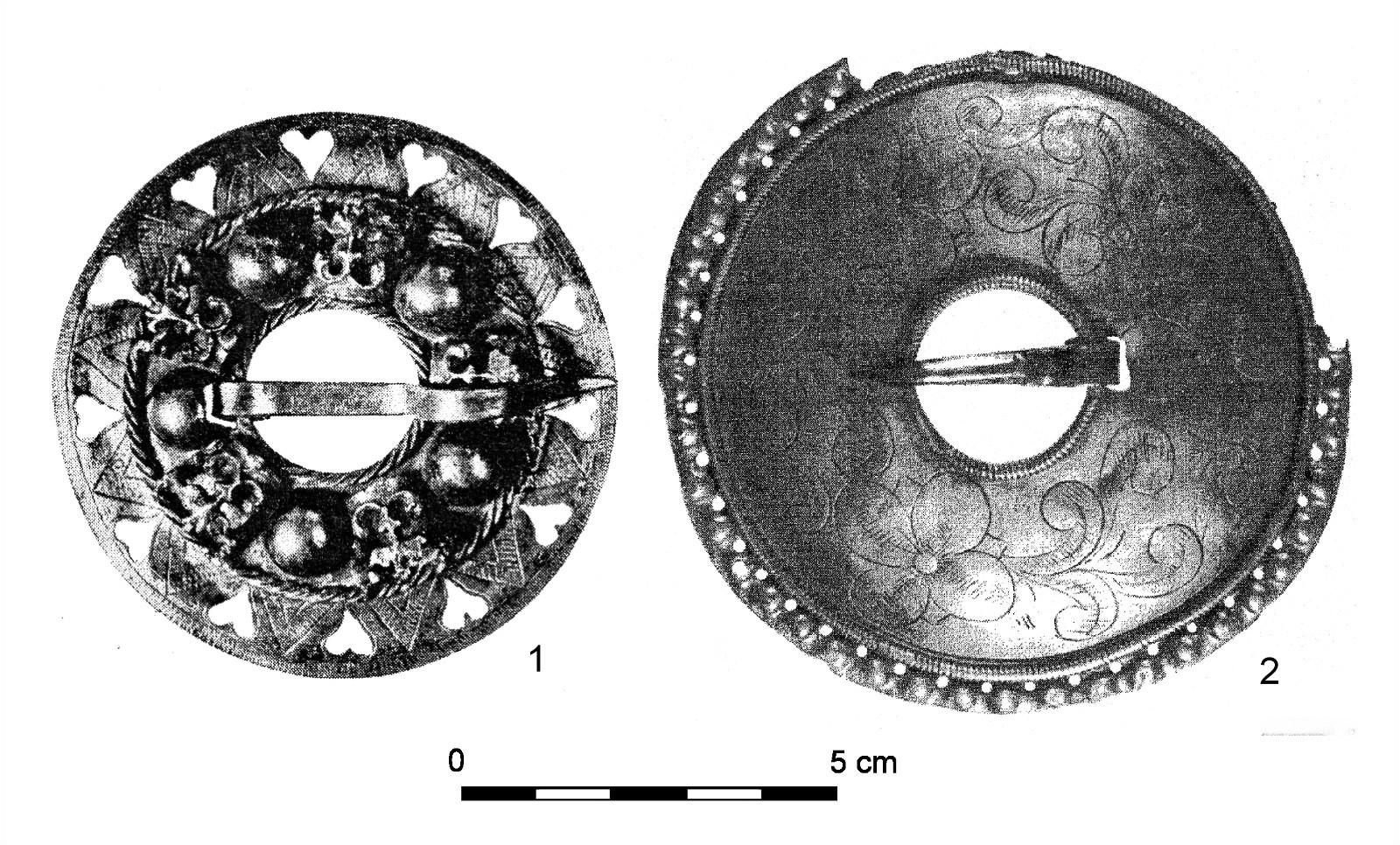 Šyša and Rusnė Finds: An Introduction to Local History Research

Summary: This study publishes for the first time from a cemetery known as Švedkapiai (Swedish Graves) or Maro kapeliai (Plague graves) from the village of Šyša (Šilutė District, former Heydekrug) in the Nemunas Delta (Fig. 1, 2). The cemetery site is a small elongated hill which once (1972–1984) was protected as an archaeological site of local significance. In 1929 the Šilutė medical student H. Bratkus sent a letter to the Prussia Museum in Konigsberg with a sketch of finds from the cemetery, namely a six-leafed brooch dating to the 15–16 cent. and a composite metal belt (Fig. 3). In 1954 workmen draining land in Šilutė dug up tree skeletons from the Švedkapiai and gathered the gravegoods and coffin nails which they found near the bones. These finds were deposited in Šilutė Museum. These were two circular ring brooches and a belt plate, all made from copper alloy. The design on the belt plate (the head of a cherub or cupid surrounded by wings) is exactly the same as that sketched by Bratkus in 1929 (Fig. 5). Very similar belts comprising linked plates smaller or larger in size have been found in Women’s Graves 3, 4, 14, 18 excavated in the former parish cemetery of Rusnė to which the Šyša village belonged (Fig. 6). The richest belts of the Rusnė women were published by R. Sprainaitis and dated to the 17 century See Raimondas Sprainaitis, „XVII a. Rusnės moterų papuošalai“. . Silver ring brooches were also found in these graves which in their form and decoration with engraved floral motifs are similar to the Šyša brooches (Fig. 7). The women buried in the neighboring delta villages of Rusnė and Šyša were adorned with belts of similar style and construction, and similar brooches. These finds come from the same period and their chronology can be established by comparison with similar finds from the eastern Baltic Region and the rest of Europe. A fashion for women’s composite metal belts thrived in Europe during the 16 cent. and the first half of the 17 cent See Jörg Harder, „Segmentgürtel mit mehrteiliger Anhängekombination – Ein Frauenschmuckgürtel der Renaissance“. . It was typical of the eastern Baltic region too, where expensive silver chain belts with plates on the front part have been unearthed (near the female skeleton No. 2 found at Cēsis (Venden) Castle in Latvia from the 1570s (Fig. 8) and in the 17-cent. hoard at Kuikatsi (Lowenhof) in Estonia; in the Mazjumprava [Jumpravmuiža] hoard in Courland, near Riga, which is thought to have been hidden in the 1650s). It is interesting that the Mazjumprava belt belonged not to a member of the upper classes but to a wealthy fisherman. Moulded copper belts were made for a wide range of consumers, judging by the numerous finds made in the Nemunas Delta. Motifs signifying marriage (cherubim, cupids, angels) decorated the y a and Rusnė belt plates and these were spread widely throughout Europe. This is typical of the decoration of German bride belts (Brautgürtel). In Courland (Riga) during the second half of the 16 cent. there was a strong group of craftsmen making metal belts and the fashion for Curonian women to wear such belts lasted until the 18 cent. and in some places as late as the 19 cent. The Rusnė and Šyša finds represent local variants of a European fashion and were influenced perhaps by Curonian makers.

Silver gilt ring brooches with nodules from Women’s Graves 3 and 14 at Rusnė are similar in extravagance and form to silver nodule brooches found in what is now Latvia (Courland and Livonia) (Fig. 9:1). They were particularly popular in the 17 cent. and derivative versions were worn in Latvia in the 18 cent. From historical sources we know that such brooches were made by goldsmiths in Riga, Jelgava/Mitau, and Bauske as well as in places closer to the Nemunas delta such as Kuldīga/Goldingen, Liepāja/Libau and Ventspil/Windau. It is hard to tell whether the Rusnė brooches were made by goldsmiths in Eastern Prussia or Courland. The Šyša ring brooches with nodules represent a simplified form of silver nodule brooches such as those found in Rusnė Graves 3, 14. Attention should be paid to the engraving on the Šyša brooches which is also more simple in comparison with the decoration of the brooches from Rusnė 4 and 18. At the turn of the sixteenth and seventeenth centuries engraving silver and bronze brooches was common throughout the eastern Baltic – as we see from finds in barrows at Kambja and Siksala Kirikumagi (Estonia, Fig. 9:2), the Latvian hoard at Mazjumprava and the Semigallian barrows at Tervete and Vilces Kalnaplate. The plates on belts from Cēsis and Kuikatsi were engrave with floral designs. Thus the ring brooches from Šyša and Rusnė are a local reflection of eastern Baltic forms showing the quite close similarities in fashion between inhabitants of the Nemunas Delta and Courland.

The Šyša star/rosette brooch is the earliest of the Švedkapiai finds and shows that the hill was a village cemetery as the 15 cent. when the church at Rusnė began to function. On the basis of stylistic similarities and parallels from the eastern Baltic the widest chronology of the Šyša and Rusnė finds would be the late-16 and 17 centuries; the narrowest dating period would be the first half of the 17 century. The name for the old village cemetery at Šyša (Švedkapiai, Maro kapeliai) may derive from local memories of Swedish rampages in the area in the 17 cent. or the loss of local life to plague in the early 18 cent. It may be that the Švedkapiai were abandoned as ‘alien’ or ‘unclean’ at the turn of the 17–18 centuries. Later two new cemeteries were established at Šyša, closer to the Atmata river on both its left and right banks. On the basis of Prussian sumptuary laws from 1577–1620 the women buried in Rusnė with belts may have belonged to either the second rank of free inhabitants or the third rank of inn-keepers and peasants, who were permitted to wear silver ornaments. The Šyša finds may have belonged to such classes of people or to lower groups of servants and hirelings.

The ring brooches with nodules are of Curonian style and may have been imported to the Nemunas delta by refugees from Courland to Prussia who are mentioned in 15–17 cent. sources. Otherwise the style may have arrived via cultural-commercial links spanning the eastern Baltic littoral. The ‘democratic’ spread of the European fashion for composite belts among women of the middling type in the lower reaches of the Nemunas river and local regional peasant brooch fashions reveals links between people of various classes. The common stereotype of “upper class Germans” and the “lower-class Balts” should be tempered. Life along busy and strategically important water routes determined the europeanisation of female dress and the maintenance of regional features.